Going Beyond a 2% Solution

“X-the X Waiver” has been the slogan used by physicians and public health advocates fighting for greater access to buprenorphine, a medication proven to treat opioid use disorder (OUD) with higher effectiveness than many other treatments. Despite being safe, however, buprenorphine is tightly regulated, and to prescribe it, health care providers need a permit (the X-waiver) issued by the Drug Enforcement Agency after 8 hours of often expensive training (for physicians) or 24 hours of training (for nurse practitioners and physician assistants). Many rightfully view this requirement as a significant barrier to efforts to curb the opioid epidemic.

In the meantime, the number of physicians who are X-waivered remains abysmally low, despite efforts to increase uptake across specialties over the years. That paucity of providers who can prescribe buprenorphine means that certain patient populations have less access to a life-saving medication. There is ample evidence for instance, that buprenorphine is significantly more accessible to white, commercially-insured individuals.

Pregnant patients with OUD, a particularly vulnerable population, face greater barriers than their non-pregnant counterparts in accessing buprenorphine. Pregnant patients who are Black or Hispanic have an even more difficult time accessing buprenorphine. It is possible that providers are uncomfortable initiating a new medication during pregnancy, even though buprenorphine is FDA-approved to treat OUD during pregnancy. One study found that in 2012, fewer than 1% of obstetrician-gynecologists were X-waivered. In 2017, professional guidelines for OUD in pregnancy were updated by the main professional society for obstetrician-gynecologists, recommending universal prenatal OUD screening, and highlighting buprenorphine as a first-line therapy.

In a new nationwide study in JAMA Network Open, we describe the current prevalence and geographic distribution of X-waivered obstetrician-gynecologists in 2019 among more than 31,000 who treat patients with Medicaid. We found that only 560 (1.8%) are X-waivered. Those who are X-waivered are more likely to work primarily in outpatient settings and in counties with fewer uninsured patients. 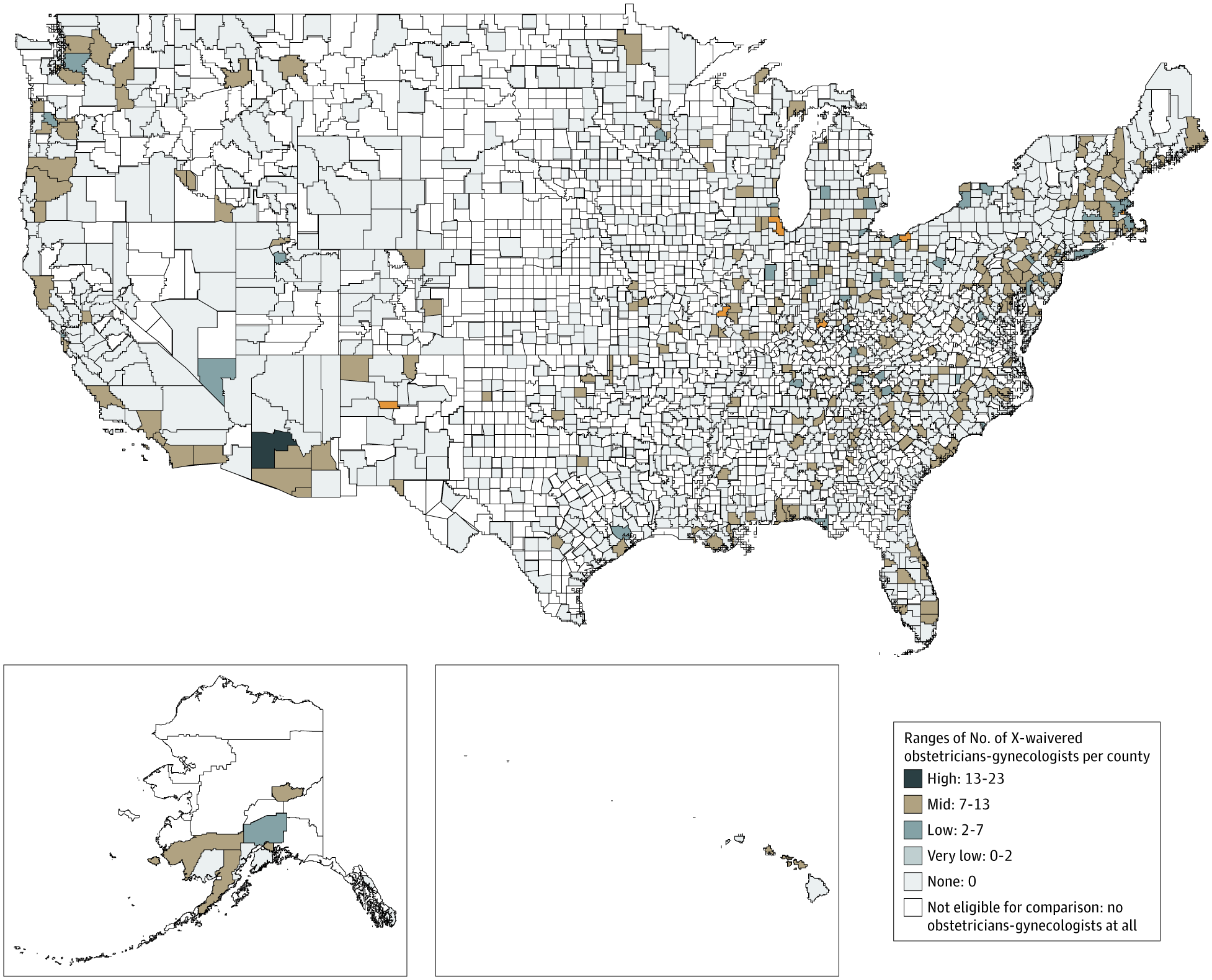 Patients newly diagnosed with OUD during pregnancy are in frequent contact with the health care system because of prenatal care. Receiving OUD care from an obstetrician could help in alleviating the potential burden of additional clinic visits. In addition, as opioid surveillance data show, many patients are first diagnosed with OUD when they present for labor and birth. In this setting, obstetricians could initiate buprenorphine in newly diagnosed patients and provide them with referrals to outpatient addiction providers, akin to the successful warm handoff approach used by emergency physicians.

Patients on methadone face an existing burden of being required to present daily to outpatient treatment programs to receive their medication. If clinically feasible, it may be desirable to transition to buprenorphine during pregnancy. In the postpartum months, this may be even more critical as patients deal with added demands of caring for a newborn marked by frequent sleep interruption. Prescribing buprenorphine may be a more patient-centered approach when daily methadone clinic visits may not be feasible.

In addition, increasing postpartum access to buprenorphine may help address an overlooked aspect of the maternal mortality crisis: drug overdose has recently become a leading cause of postpartum death.

To take it a step further, for pregnant and non-pregnant patients with OUD, x-waivered obstetrician-gynecologists could offer to initiate treatment to sexual or romantic partners. Substance use is a social behavior, and prior evidence shows that women who use drugs are often in relationship with partners who also use drugs. Having a partner with untreated OUD may be a barrier to adhering to treatment, while dyadic treatment may enable adherence and retention in care and reduce the risk of contracting sexually transmitted infections. Understandably, many obstetrician-gynecologists may have reservations about initiating buprenorphine for their patients’ male partners, but this practice would be similar to expedited partner therapy, which allows physicians to treat patients’ sexual partners to help prevent the spread of sexually transmitted infections. Certainly, buprenorphine is not harmless and may precipitate patients going into withdrawal in some scenarios, so this practice may require connecting patients’ partners with long-term OUD care.

Individual obstetrician-gynecologists may be reluctant to become X-waivered and learn how to treat OUD. While there is a learning curve, obstetrician-gynecologists have a record of treating complex medical conditions, such as gestational diabetes. Further, as a partial-agonist, buprenorphine is significantly less harmful than full-agonist opioids that nearly all physicians prescribe for pain treatment. Health systems and professional societies should understand and address other barriers to becoming X-waivered, such as stigma from colleagues and other medical staff, and administrative hurdles. Our study showed that X-waivered obstetrician-gynecologists were more likely to lack hospital privileges, which limits the type of settings where they may provide OUD care. Thus, health systems should set up an infrastructure that would facilitate integration between inpatient and outpatient substance use disorder services.

Ultimately, while the X-waiver may get “X-ed” in the long term, treating substance use disorders should become an important competency across medical specialties that provide primary care and reproductive care.

Max Jordan Nguemeni Tiako, MS is a final-year medical student at the Yale School of Medicine, and was a year-long fellow in the Center for Emergency Care and Policy Research at the University of Pennsylvania.